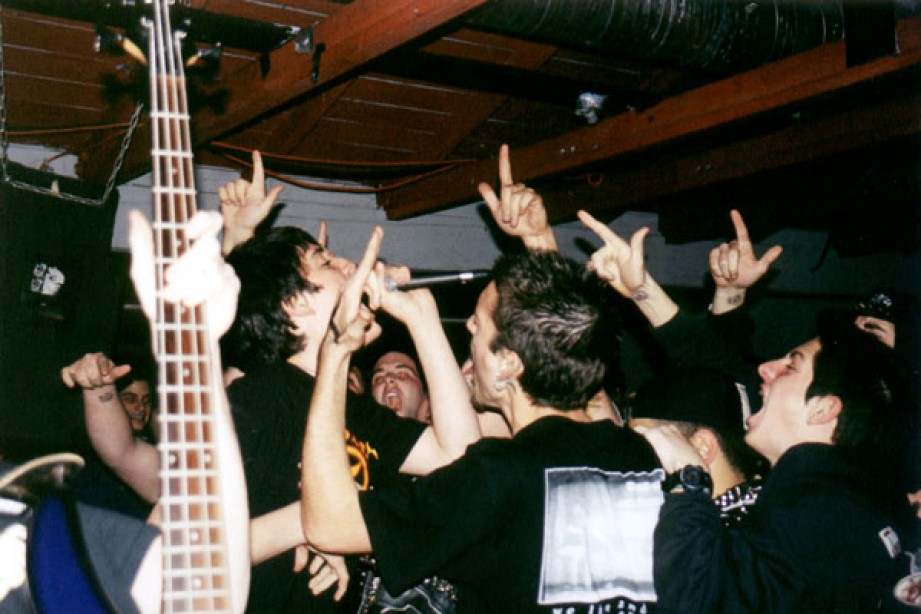 How does one of the darkest and lyrically angry metalcore bands in the country reside in sunny peaceful San Diego, CA, you ask?  Maybe it’s the complacency, sameness, and tedium of those seemingly beautiful sunny days.  Too much of anything can drive a person mad.  Maybe that’s the case with American Tragedy.  Bombarding heavy music fans with their own brand of metal, hardcore, and even a little melody since their inception in 1998, this band seems bent on letting you know that everything is not always coming up roses.  Everyone has those feelings.  Only a fool would try to deny that.  Try to imagine a mixed drink of Poison The Well and Strife, shaken AND stirred into their own new special concoction.

The band has gained a loyal following playing quite frequently in and around their hometown of San Diego, CA.  They have also done some touring up and down the West Coast and in the South, gaining quite a bit more notoriety as they pummeled the audience at each stop.  This has given them the pleasure of having played with the likes of The Hope Conspiracy, Converge, Poison The Well, Buried Alive, NIV, Darkest Hour, Thrice, and so many more.  With an extensive American Tour planned with fellow San Diego band The Cause, more damage should be done all summer long and continue into the Fall.

Not being much for waiting for opportunity to come knocking at their door, AT independently released their own nine song demo, entitled “Children Of War”.  After solidifying their line-up and a few member changes, the band released a split CD with The Cause in 2000.  This limited edition CD was entitled “The Heraclitus Theory” on Congruency/Tear It Down Records.  Shortly thereafter, they released their self-titled 7”, which was also on Congruency/Tear It Down Records.  Now, the band seems more ready than ever to invade the U.S. with their new release on Pluto Records, a split with friends As I Lay Dying (also San Diego natives).  2002 will no doubt be a stepping stone for this band to divide and conquer the metal and hardcore scene everywhere.