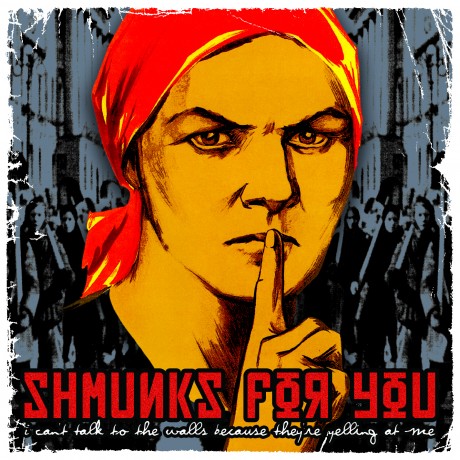 Shmunks For You was a darkly polished hardcore punk band from Dallas/Fort Worth, TX. Their explosive stage presence and unique style of melodic hardcore helped them gain local and regional popularity since their formation in 1998. After self releasing a few demos and a full-length, Burn Religion Burn, they joined the Pluto Records roster and entered Deedle’s Room Studio (Red Animal War, My Spacecoaster) in Arlington, TX to record what would become their masterpiece and sadly their last recording as the band called it quits soon after its release.

“Texas’ melodic hardcore fledglings Shmunks for You deliver a stupendous full-length debut with the uniquely titled I Can’t Talk to the Walls Because They’re Yelling at Me. Honing their distinguishable style by inflecting the melodies of emo with aggressive hardcore dominance, these four young men have capitalized on the wave of metalcore bands that emerged in the public’s eye throughout 2001 and have succeeded in creating their own niche in a scene that seems to be overflowing with talent. Similar to such lauded independent artists as Thursday, Thrice, and Grade, Shmunks for You rage with the passion of devoted musicians and the conviction of their faith. The combination of screams and light singing works most effectively on “You Don’t Need a Death Certificate to Die,” where Adam Sands and Scott Victory feed off each other’s every word as their lyrics delicately deal with being ready to die. Other high points on this spiritually cluttered album include “Twenty-Four Hours” and the moody harmonies of “The Known Is Ended.” While those less inclined to enjoy groups who promote religious faith may not find much here to enjoy, anyone with an open mind or a solid love of hardcore/punk should be more than pleased with Shmunks for You.” – Allmusic.com